That was then! And to date the squeak remains my favorite animal sound! This became both my ultimate dream and favorite song: To live forever young! Life was so easy, its fulfilling joys boundless. The color of day break inspired infinity, the sunset and moonrise a classical of inexpressible awe and beauty. We played hide and seek with the squirrels in the lush foliage of the breezy trees as we watched our kites wave among the eagles with such gaiety, promise and abandon in the magnificence of the evening sky, high above the glorious sunsets of the hilly horizon. We excitedly looked forward to the fascinating bedtime accounts of the legends.

That was then! Down the lane, life presented its own twists and surprises, pleasant and mean alike. Expectations did not perfectly fall in place all the time, truth seemed relative and wisdom was not always the default lens that informed my choices. So much grew progressively different. I sadly watched as my dream drifted to obscurity and my song faded away. With time, that was just what became of it: A dream! I found myself in a long winding road to nowhere. With great optimism, I industrially worked to fill up the void, wounding both myself and others in the process. To my utter shock, the void only grew broader and deeper. The emptiness was consuming me.

Tucked somewhere at the back of my mind through the years was the famous tale of the legend of walls. Dad’s concluding remarks on the night he read it to me was permanently embedded in my memory.

“It happened on our very soil, real-time, many years ago that early seventh morning. Nations watched in disbelief as the historic event unfolded. His trail resolutely blazes on, even now as we speak! You must make contact. Wherever you go, whatever you do, keep your antenna trained on him. Allow him to fully capture you; for he is the real deal!”

Details on the official route for the dignitary and his entourage were made public on the previous day. The city was beaming with activity as residents and visitors lined up early the following morning. I was among them. The crowd was overwhelming so I sought a vantage place from where I could have  clear visibility. I smiled and casually waved as a mother carrying her son who was waving a blue kite walked past me.

The crowd was swelling enormously and suddenly there were shouts of jubilation and great commotion ensued signaling the arrival of the awaited luminary. I was beginning to realize everything I had heard about him was true, only I had grossly miscalculated the magnitude of his prominence. The crowd was heavily surging forward and before I knew it, I found myself uprooted from my spot. I frantically attempted to make contact, peeking above the towering figures in the crowd but found myself greatly disadvantaged and drifting to the edge, away from the significant moment.

Just then, a sharp familiar squeak tore through the air. I instinctively spun around and looked above me to see a dray of squirrels waving at me. Within no time I was on my way up the tree. They joyfully made way for me as I quickly maneuvered to secure a clear view. The sea, not far from there was visibly calm. I was just on time to view the spectacular motorcade making its way through amid jubilation from the thrilled crowds below. There was no scheduled stopover in our city for it was headed for the nation’s capital city.

From the tree top, I impulsively began humming my favorite song. I was marveling and waving at the scene below, with a big chunk of the outriders already having driven past when all of a sudden, I saw the vehicles begin to draw to a halt. Judging from the sequence of events, one could tell it had been a spontaneous move. I saw car doors burst open in a dramatic fashion and security detail run towards what must have been the dignitary’s car right under me. Clad in dark suits and sun glasses,they clutched on their radio communication under the seething mid-morning heat while others held back the curiously advancing crowd, securing the entire motorcade perimeter.

Almost simultaneously, a loud drone filled the air and I noticed part of the security team below had a fixed gaze at me. That was the same for a sizable part of the crowd. Two of the squirrels by my side exchanged nervous glances that suggested I needed to vanish in thin air! They ducked under the thick green branches that were swaying violently under the gigantic propellers as the air surveillance closed in. From a distance, I saw a heavily manned coastguard rapidly approaching land. By now, a thick human shield was engulfing the royal car. Everything went still. For the first time this day, my heart skipped a beat as it dawned on me I could be in grave danger!

There was a slight movement at the side of the car before the door opened and a glorious figure emerged, beckoning me to come to him. I must have been on a trance! I have no idea how I found myself standing next to him. Time stood still. I held my breath in a spirited attempt to restrain my adrenaline as I waited for the bomb to explode! Instead, the sweetest smile I had ever seen broke across his face. His car had the inscriptions “Alpha the Majestic!” He then gave me a firm hand shake. At first I felt embarrassed looking at the radiance on his face that was reminiscent to the sun but his warm handshake and eyes filled with love assured me it was ok.

I felt the disgrace I had carried all along begin to fade away. The walls I had built around me that had for so long alienated me from life were tumbling down in the conquering power of his love. I felt the healing balm take away the pain and regret that were so heavily weighing my heart down. All at once, I felt the burden lifted off.I felt so light! In the brilliance of his face and the warmth of his handshake, I came alive and instantaneously felt the securities I had so desperately pursued through the years lose their iron grip on me. I was free! Here was my long coveted chance to live forever young! It felt too good to be real. I managed a glimpse of the child I had earlier seen as he released his kite that took to the blue sky waving in the cool breeze of the early afternoon.

When I could not control myself any longer, I broke and Alpha held me in a loving embrace. I was engulfed right at the epitome of truth, in the arms of the sovereign ruler of the nations! For a moment, I beheld immortality. I knew I would never be the same again as the golden sash around his chest absorbed me tears. 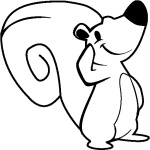 Then I felt all strength depart from me as Alpha invited me to his stately car. I could not believe it when he announced he was making a detour from his itinerary for a stopover at my house, a move that caused a heated stir within the masses who had watched speechless. I was broken beyond expression.As security ushered me to his car the squeak came again! I turned with teary eyes to see the two squirrels in full salute from the sycamore tree. I saluted back before embarking on the grand limousine as the long motorcade backed by air surveillance wound its way in the historic ride.

©The Blazing Trail 2012. All rights reserved